On this day in 1830, a poem (later a nursery rhyme) Mary Had a Little Lamb, by Sarah Hale was published. Later in the decade Lowell Mason set the poem to a melody adding repetition in the verses.

The poem was the first thing recorded by Thomas Edison on his newly invented phonograph in 1878 and is often said to be the first words ever recorded in sound history. Unfortunately this historic recording could not be permanently preserved but Edison repeated his words later, now available to hear on Youtube (or use imbedded link below).

For that reason, if for no other, the poem is likely to be heard for millennia to come. (The actual story of the first recording is a little different, but I’ll leave that for another post.)

Mary had a little lamb,
Its fleece was white as snow;
And everywhere that Mary went
The lamb was sure to go.
– – – – – –
It followed her to school one day,
Which was against the rule;
It made the children laugh and play
To see a lamb at school.
– – – – – –
And so the teacher turned it out,
But still it lingered near,
And waited patiently about
Till Mary did appear.
– – – – – –
Why does the lamb love Mary so?
The eager children cry;
Why, Mary loves the lamb, you know,
The teacher did reply.

Sarah Hale’s parents believed in equal education for both sexes, and Sarah became a school teacher, influential editor and writer of many novels and poems. Her many works includes the anonymous book The Genius of Oblivion and Other Original Poems (1823) and, a few years later, the novel Northwood: A Tale of New England (1827), in which she took an anti-slavery stance.

Nor need we power or splendor, wide hall or lordly dome; the good, the true, the tender- these form the wealth of home.

She was a staunch supporter of education for girls and women, and pushed for female entrance into professions such as teaching and eventually medicine. Hale did not support women’s suffrage. 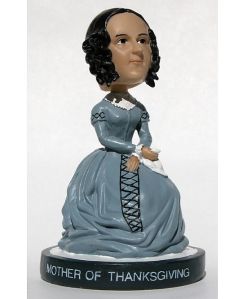 Finally, Hale has also been called by some the Mother of Thanksgiving as she strongly advocated the day be recognised as a national holiday; having previously been celebrated only in New England.

BELOW: Thomas A. Edison – A repeat of the first recording Edison ever made (1878). Sarah Hale’s poem, Mary Had a Little Lamb